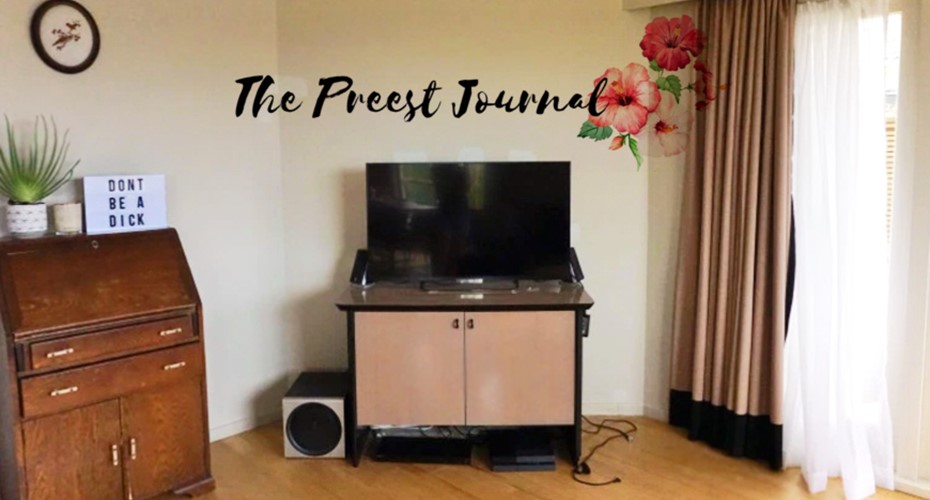 Our lovely clients who recently bought their first home have been chronicling their journey from purchasing to moving in and now, what happens after. If you missed the first post of this mini-series, jump over here to read it.

A common experience had by anyone who's bought their first home is observing all the little quirks now that there's been time to inspect the nooks and crannies. And the fun part - planning the renovations and this is a classic example:

We have been in this house now for about as long as it took Winston to pick the government. We moved in on election day and I may or may not have forgotten to vote in the excitement of moving. And yes, I know I should have voted early. They even had voting booths at my work, so I have no excuse! I had every intention of voting, but hey, at the end of the day it was all up to Winston, so no harm no foul, right?

Now these aren’t truly before photos. Since moving in, we have replaced most of the lights to down lighting, we have patched up the myriad of random holes in the walls and have replaced the net curtains (in these photos I was yet to trim them to fit). Dom today has also gotten rid of the old concrete plinth from where the fire place used to be. I slept through the noise of the concrete breaker because apparently, I have mastered the art of day sleeping (thanks to shift work). I woke up to a great big hole in the floor and a mountain of concrete and dust to be cleaned up in the garage, but now we can get rid of the pointless wall!

I shall also apologise now for the photo quality. I am not a photographer, though I have every intention of learning. I got lazy and put the camera on auto. The grainy photos below of the bathroom on wards are testament to why I will always be choosing manual in the future. 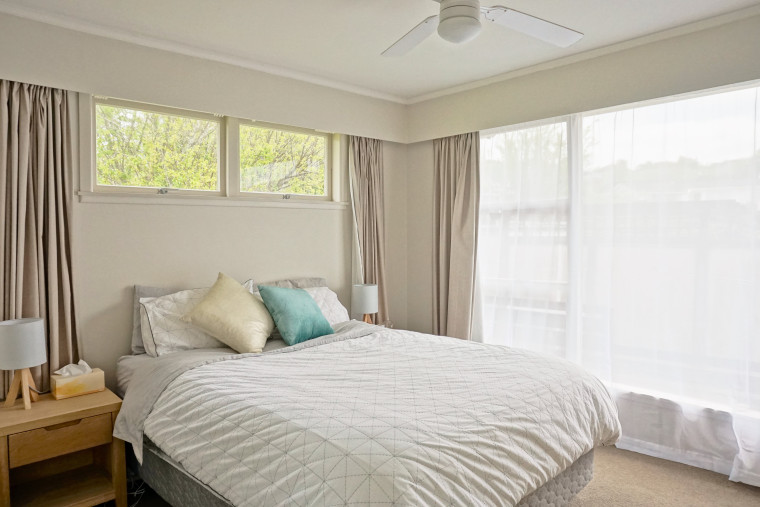 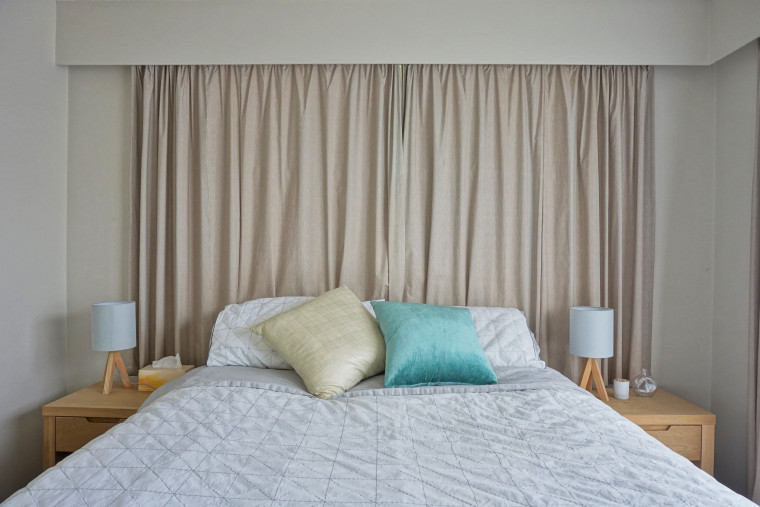 Whose idea was it to make the curtains so long that you can’t even have your bed against the wall? I am not sure yet if we should keep the ceiling fan or not. I may love it during my day sleeps in summer, but also its ugly. Form or function? That is the never-ending question. 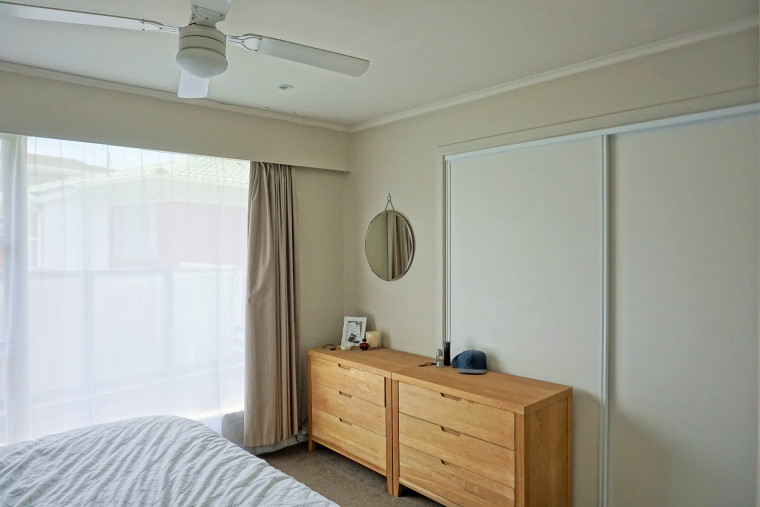 En suite with the ugliest vanity in the world 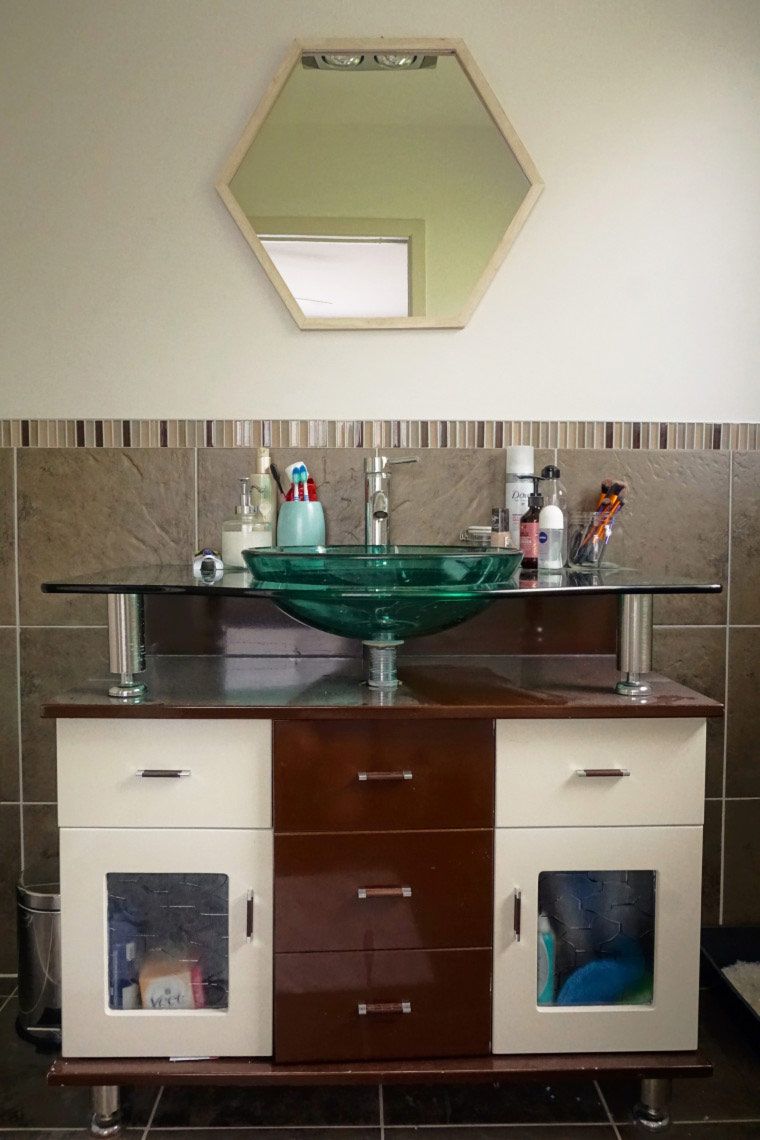 I almost feel that this vanity should have its very own blog post. Why would anyone pick this?! Below are the reasons I have come to hate this thing.

Also those three drawers in the middle, they are actually just one cupboard… 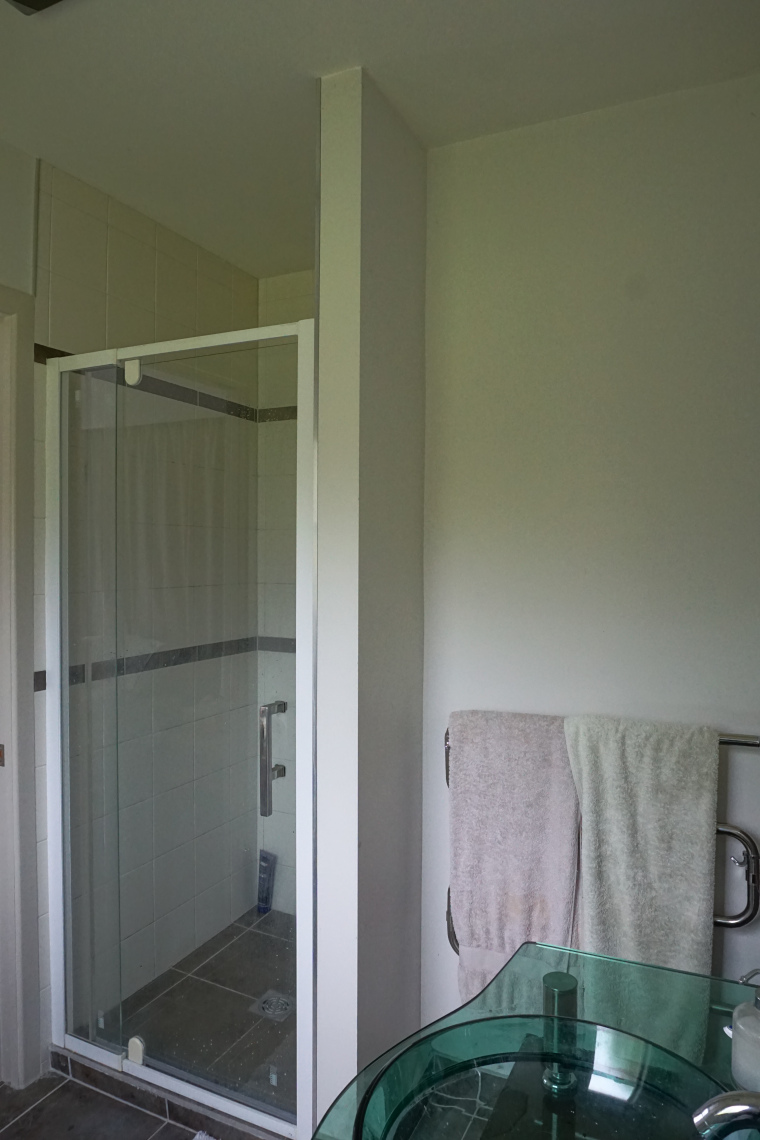 As a side note, the water pressure in this house is intense. I never have the shower on full pressure for fear that my skin may just peel off. I am not complaining though. Our last house had a shower that was similar in pressure to standing under slowly dripping pipe. 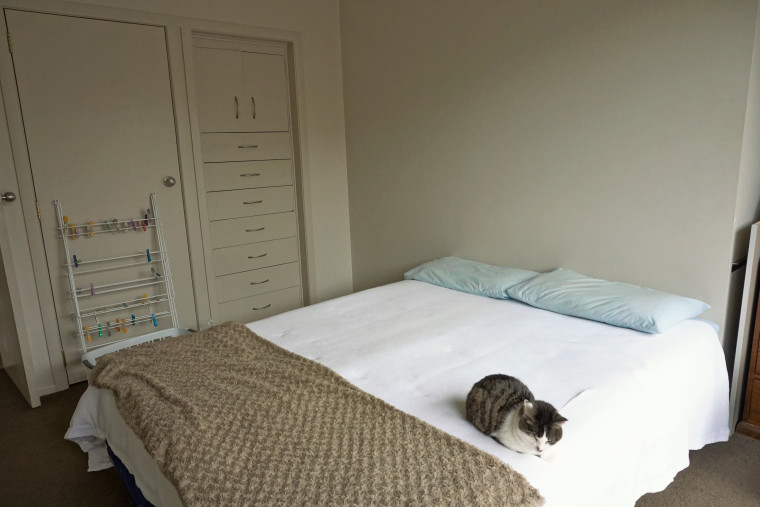 Why did 60’s houses have built-in drawers? There is also another small bedroom/office. It is currently being used as a dumping ground, so I didn’t take a photo of it I didn’t think an unmade bed covered in washing and piles of paper was of much interest. It’s much the same as above but super small with a built-in wall desk/drawers. 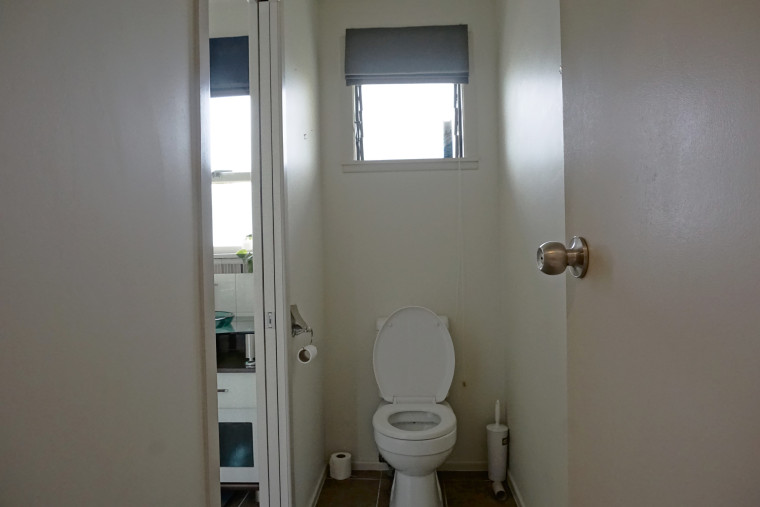 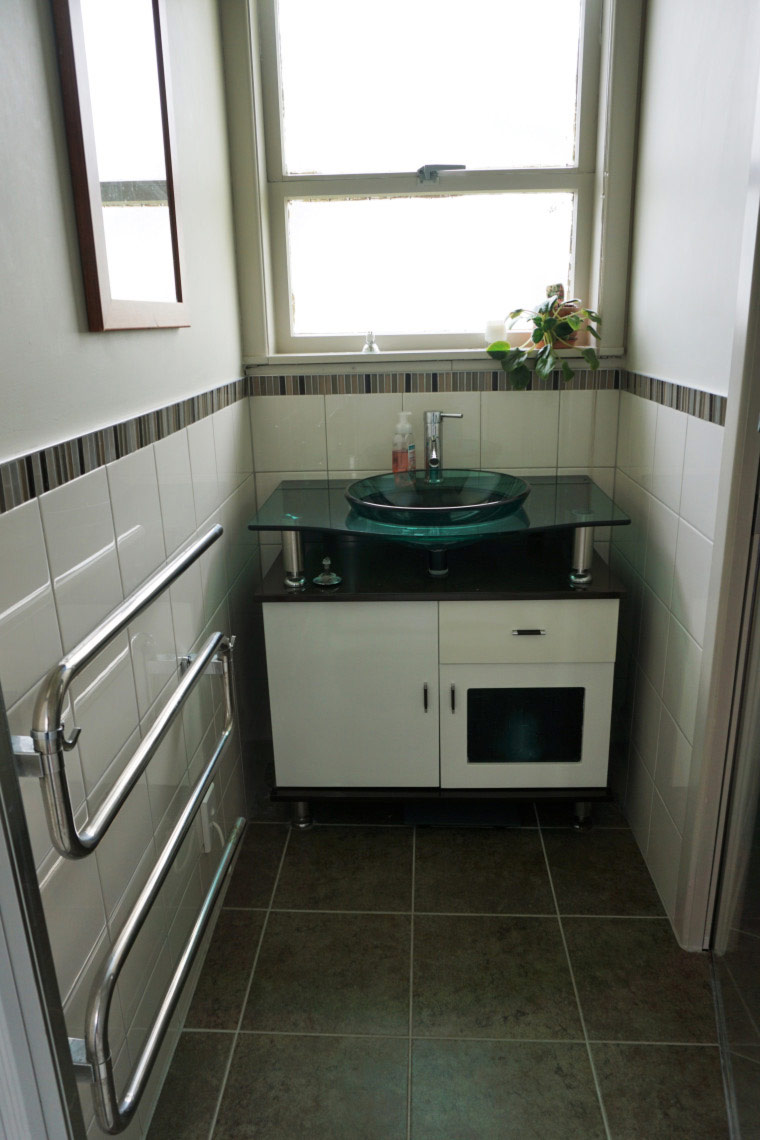 This one is the slightly prettier sister of the ensuite vanity. Just so you get an idea of the layout, I took this photo from inside the shower. That pointless dividing wall is on our hit list. 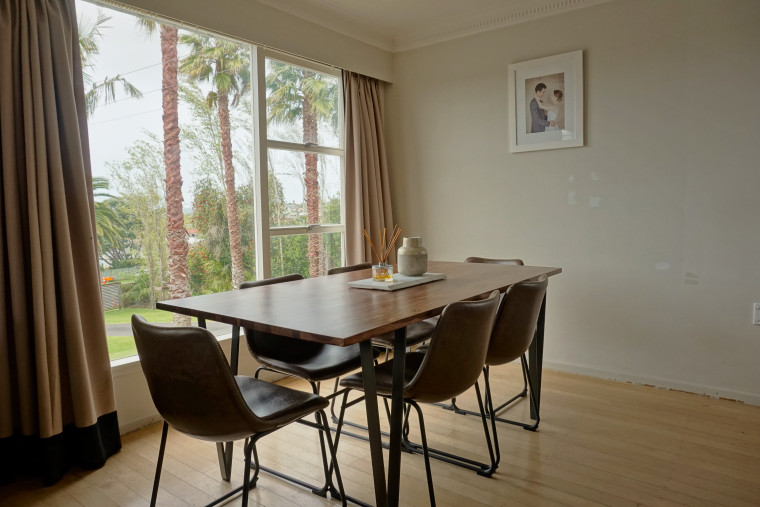 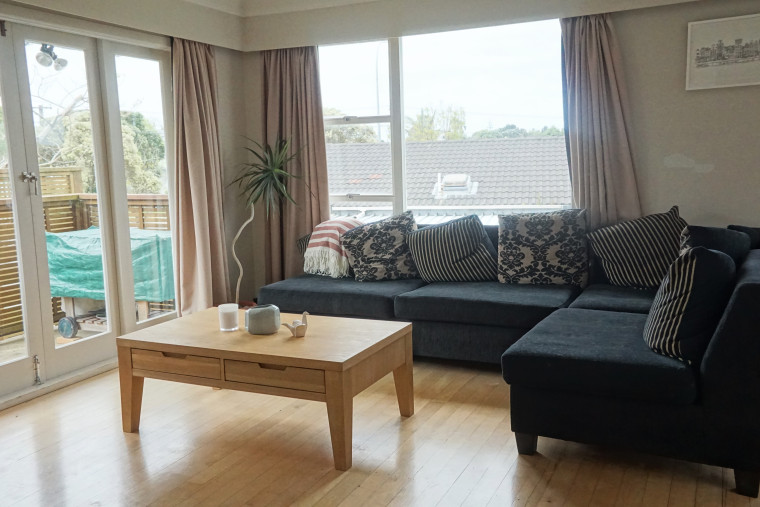 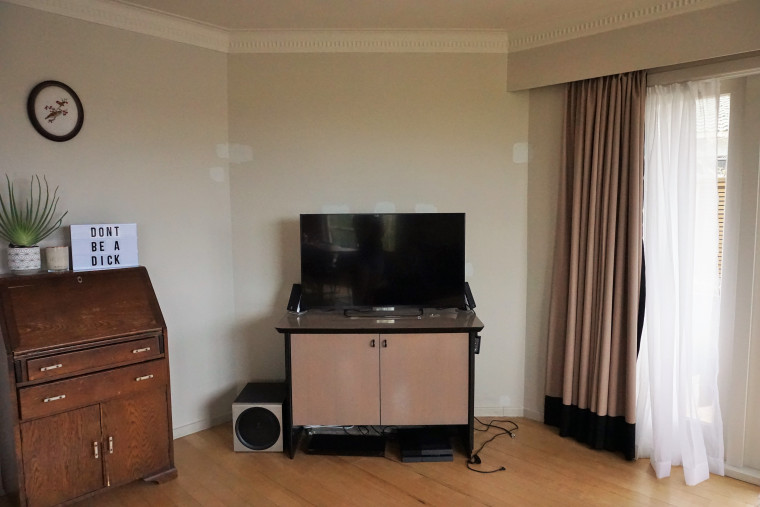 Please take note of the random white patches on the walls. Dom patched up the defects in the walls around the house (including some rather large holes, for who knows what purpose). I took along a piece of skirting board he had taken off from what was the old fire hearth (it was underneath where the TV currently is) to get a colour match. As far as we could see, the walls, door trims, doors and skirtings were all the same colour. Oh, but we were wrong! We got a colour match pretty spot on for that piece of skirting board. The walls, however were just a shade whiter. Because who wouldn’t want to paint everything in their house slightly different shades of the same colour so no one can actually see the difference until you throw on some paint in the wrong part. We went back and got two other test pots, both which we thought were the right colour. Both were wrong. So three (or maybe four) coats of paint later and those patches are staying white until we paint the whole room. 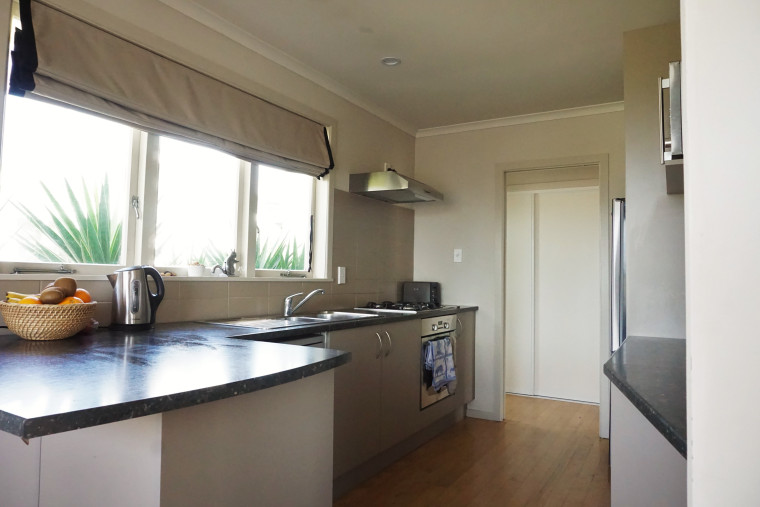 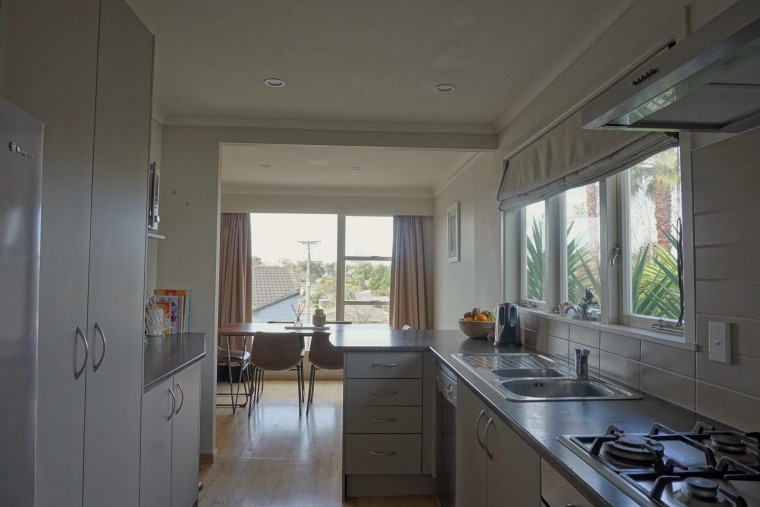 The kitchen is reasonable, but green. It has some good things such as a gas stove top and a dishwasher. The storage is lacking, and I was so close to just throwing out all my baking trays when we unpacked as I couldn’t for the life of me get them to fit anywhere. And the oven doesn’t have any markings on it so we spent about 20 minutes working out where grill and bake was on our second night.

Overall, I love this house, but all through it there are just annoying little quirks. Like barely different paint colours on everything. There is paint all over the windows (they used masking tape but managed to get paint beyond where the masking tape was - it looks like a two year old did the painting in some areas). The architrave in the dining room just suddenly stops, leaving 2 metres with nothing. There is a random wall in the bathroom with two different windows on each side which is going to be a nightmare when we make it one room. The paint colour is ok, but it is peeling off or is chipped/scratched and the floors are the same. I cannot wait until I get to do a full house tour of ‘after photos’. But patience is a virtue. The next thing to happen will be getting rid of a wall, or maybe two.

This blog was written by Alisha Preest and has been used with her permission. You can view the original post here.